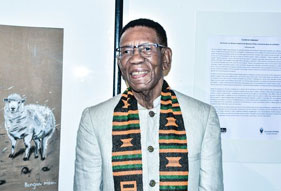 Celebrating the life of an African Shepherd, Dr. Motsoko Pheko

Celebrating the life of an African Shepherd, Dr. Motsoko Pheko

On Thursday, 12 November 2020, Vaal University of Technology (VUT) was honored by the presence of Dr Motsoko Pheko and his family. The celebration was a symbol of sharing love of his long-lived life through an art exhibition that was put together the VUT Visual Arts and Design staff and students. Mr. George Mvalo, the Director of Social Justice and Transformation Department, said that “We are very privileged as VUT to be selected by the Pheko family to be one of the few South African Universities to honor Dr Pheko’s sterling contribution to human development under theme of Fair & Just: An African Shepherd Dr. Motsoko Pheko Commemorative Art Exhibition in the Bodutu Gallery, to celebrate his 90th   birthday.”

Dr. Pheko has written more than 30 books, on varied topics ranging from history, law, political science, and theology. Some of his books include: The true2 History of Sharpeville Must Be Told; Hidden Side of South African Politics; How the Freedom Charter Betrayed the Dispossessed; to name a few.

His art exhibition was based on four purposes, : (a) to celebrate and memorialize the scholarly and intellectual  contributions of over 30 books written by Dr Pheko; (b) to memorialise Dr Pheko’s significant contribution  through an art exhibition  a book discussion that took place on Thursday, 19 November 2020; (c) to expose new generations and  young people to Dr Pheko’s works  , and (d) in a unique way of celebre Dr. Pheko’s 90th   birthday One of the VUT’s mandate is to be an engaged institution   through engaged scholarship  with its local  communities and industry. The event neatly addressed the role of being an institution that engages in transformative engagement for social impact.

Dr. Pheko’s daughter, Ms Lebogang Pheko, spoke on behalf of the family during the official opening of his father’s art exhibition and expressed the family’s gratitude towards VUT. In her address, she stated that it is with great integrity that VUT has offered to them an opportunity to celebrate their father while he is still alive. “Spaces like this are the place where public heritage seeks to present memories and also faces of public engagement, inviting everybody to engage with Ntate Pheko’s moving legacy, as well as one which can be lifted off and continue with the decolonial project,” said Dr. Lebogang Pheko.

In closing,  Ms Ntsana Pheko, spoke on behalf of all Dr. Pheko’s grandchildren and described Dr. Pheko as his ‘Papa,’ a grandfather, an adviser protector, and a professor she always strives to make proud. She further said that growing up in his presence has always been a wonderful blessing as he made her dark days to shine bright with his hilariousness. She described him as the humblest gentleman she ever met and wished to be like her grandfather when she reaches her dreams.

“My papa always encourages us that women are the most powerful beings on the planet; they can do anything nor accomplish anything. Let me take this opportunity to thank my papa on his special day for being a pillar of light when no one else can give me, thank him for bringing this family together, for raising us the way he has done even though some days were not easy, providing for us and thank him for being so special and unique to all of us,” said Ntsana with a delightful smile.

Dr. Motsoko Pheko, was born on13 November 1930 in Lesotho and raised by his aunt Ms. E.M Moerane in South Africa after his parents’ sudden death. Dr. Pheko became an activist in South Africa as a member of Pan Africanist Congress (PAC) in 1960 as an organizer, branch chairperson, country representative, and member of Parliament in several portfolios Committees like Foreign Affairs, Safety and Security, Justice and Constitutional Development and Culture, Arts, Science, and Technology.

The word ‘shepherd’ triggers many meanings, and generally resonates with the Biblical meaning and its figurative use, referring to God. King David, in Psalm23 announces that “The Lord is my shepherd”. In everyday life the word is related to the ordinary person who herds, looks after, guides, and protects domesticated animals such as sheep against wild animals or predators, theft, hazardous terrain and water, and they care for the sick. From this perspective, then what it is meant by an African shepherd, “Modisa wa Moafrika”, “Umalusi waseAfrika”, “Mchungaji wa Kiafrika”, “Mufudzi wemuAfrica”. Some of the African idioms also speak of “tlogatloga e tloga kgale modisa kgomo otswa natso shakeng” (the essence of this idiom may be related to the English version “well begun, is half done”). What is common in the meaning of the word ‘shepherd’ from real life and figurative point of view, is the role of the shepherd. Therefore, this foregrounds the notion of how an African shepherd can be celebrated in relation to the African question of land, the liberation struggle history aftermath, and the African perspective on religion, amongst others.  How do we interact with those aspects of that history which remain contested terrains in the post-apartheid South Africa? Subsequently, the roles, sacrifice and resilience of ‘African shepherds’ in the struggle, and their contribution to the transformation and development of the African agendas remain less recognized and selective.

Dr Pheko is one of the living South African liberation struggle veterans or shepherds, turning 90 years this year, and he contributed to the Azanian liberation struggle in many ways at different levels – as an activist, lawyer, African writer, scholar, political leader, and a Member of Parliament. His contribution can be seen through his lifetime commitment and sacrifices in challenging the colonial vicious ideologies for Africa (on land, religion, economy, politics, human wellbeing, and so forth).  He contributed also immensely in his writings to the importance of the South African land question – a highly contested issue that South Africa is still grappling with in the post-apartheid era. Dr Pheko reminds us that “colonialists stole not only the lands of African people and renamed them. They stole also their knowledge, so that they would know nothing about themselves”.

Against this background, one way to recognise and to interact with the life history of Dr Pheko is through artistic representations such as portraiture, infographics and new media. The genre of portraiture has the power to capture a life history, portray personal qualities and present evidence or traces of cultural history.  Portraiture has been used through the ages by numerous artists, using different media for different purposes, amongst others to celebrate and honour heroes/heroines, legends, kings and queens. In Alberti’s view, portraits “were believed to have the power to…make the absent present and present the portrayed’s features to posterity”. On the other hand, visual representation and expressions are not limited to one form of manifestation/genre to commemorate the patriots (Shepherds) and icons of our struggle. Technology also provides other forms of construction, reconstruction and deconstruction of visual representation of history in different genres such as an infographic and new media (video, sound, text, interaction).

In this context, Visual arts and design students and lecturers, fine art, graphic design and photography/multimedia in collaboration with the Social Justice and Transformation Unit and Advancement Department at the Vaal University of Technology took upon themselves the challenge to reflect, visually, Dr Pheko’s life history in order to celebrate his liberation struggle legacy. This commemorative art exhibition interprets and tells the life history of Dr Pheko’s personality and individuality through portraiture, infographics and new media, using aspects of 2-dimensional studies, namely, drawing, digital paint, painting, surface printing and mixed media, poster design, video and motion graphics.