FROM ABET TO PHD GRADUATE – VUT SENIOR REGISTRAR SAYS EDUCATION SHOULD BE A JOYFUL JOURNEY, NOT A CHALLENGE 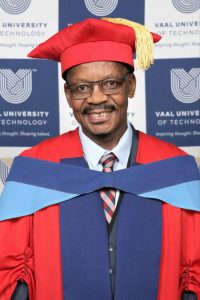 The Vaal University of Technology (VUT) Senior Registrar, George Mofokeng graduated with a Doctor of Philosophy (PhD) in Business Administration during the University’s Spring graduations on Tuesday, 13 September 2022.

His research thesis was titled: “Modelling transformation and transactional leadership, innovation and performance among South African Universities of Technology: A balanced scorecard perspective.” The study was developed to test the research model for the interconnection between transformational and transactional leadership, organisational innovation, and performance in South African Universities of Technology.

Growing up, Dr Mofokeng had a challenging lifestyle which pushed him to leave school early in Standard 8, which is now Grade 10. He said that his parents were farm workers, and as an elder son, he had to step in by assisting his parents to take his siblings to school.

His journey started when Sasol 2 Secunda appointed him in the 1980s where he worked for nine years. During his duration, he got sick and was a wheelchair user. Dr Mofokeng had pneumothorax lung disease, which caused one lung to collapse. He then decided to study before leaving his employer after recovery.

As a starting point, Dr Mofokeng first enrolled in one of the adult centres in the then Embalenhle district to further his studies and have matric, which he did pass and later resigned at Sasol 2. He remained jobless for three months and got employed by the Department of Education as a clerk in Phuthaditjhaba. He immediately applied for admission to study at the University of the North-Qwaqwa campus, where he was admitted to study BA. Ed on a part-time basis.

His clerical position and qualifications opened doors for him as he remained in the educational sector till the present day. After his studies, he was appointed as an Admin Officer/Part-lecturer at UNIN-Qwaqwa; ETDP-SETA as Skills Development Advisor; Tshwane University of Technology TUT: Assistant Registrar: Enrolment and currently a VUT Senior Registrar. 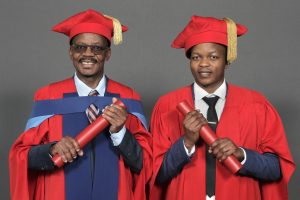 Dr Mofokeng said he is proud that he completed his PhD within the stipulated period, something he credits his supervisors, Professors Chengedzai Mafini and Roy Dhurup for. He said that he did the PhD to inspire youth to take education very seriously and know that one’s background doesn’t determine their future.

He said students should strive to take education as an entertainment and joyful journey, not a challenge; in that manner, all the sacrifices, dedication, focus and hard work will pay enormously.

“My hard work finally paid off. I used to leave my office around 20:00 and had no leisure time. My hard labour never went off for anything. I have received tremendous support from my family, friends and colleagues, and my nephew, who recently graduated with PhD from University of the Witwatersrand (WITS), Dr Teboho Mofokeng (Lecturer in VUT Logistics Department), made my life easier. I want to thank all who participated in my studies for being there through thick and thin.