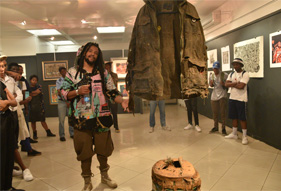 Heritage, culture, religion and tradition spark a debate and an exhibition

Heritage, culture, religion and tradition spark a debate and an exhibition

Artist: Ayanda Mabulu sharing his insights about his artwork that he exhibited at VUT

The Vaal University of Technology (VUT) Fine Art Department hosted an exhibition from 13-30 September at the institution’s Bodutu Gallery under the theme: Whose heritage, culture, tradition and religion is it?

The purpose of the exhibition was to start a conversation around this theme. Ms Nkululeko Khumalo a Lecturer in the Visual Arts and Design Department said that the majority of people fail to answer the question:  What is Heritage? Some muddle it with tradition and culture and some even think that religion is their heritage.

“As we grow older we become curious and inquisitive, we start asking questions and researching, we realise that we have been so colonised that even the authenticity of our own upbringing has been based on colonial values and norms. For example, ShweShwe material and the BaSotho blanket are not originally from Africa. The history of how the Sothos acquired those motifs is another chapter on its own. It is not just the Sothos, the same applies to the Zulus, Ndebeles etc…

“We so often take pride in things that we ourselves don’t even understand or don’t even know the authenticity of it. Being a proud Zulu women living in Gauteng I missed out on a lot of things which I felt I would have learned if I was still in Kwa-Zulu Natal, like the Reed Dance which is part of our heritage, culture and some an extent tradition,” she said.

The exhibition is an annual event, however this year she broadened the scope and decided to host the prestigious event at the university instead of an outside gallery. Having people such as Dr Esther Mahlangu, Ayanda Mabulu, Vincent Baloyi, Mthunzi Ndimande, Kolodi Sonong, Xolani Malindi, Nompumelelo Shabalala exhibiting with young, up-and-coming students was important as well.

The group exhibition also motivated the students to believe in themselves and to be encouraged to aim high.

The exhibition was followed by a panel discussion, which ended up being a huge debate. During the Sunday art talks which are held @ Iva Home Theatre (with Gamakhulu Diniso) the conversation continues of how we can reshape the arts in the Vaal.

Khumalo believes that black artists are starting to be prominent within the art spaces. Contemporary art seems to be doing extremely well currently. In closing she said that: “As an independent art curator and a lecturer at the institution, I try to align the artworks produced by our students with the industry. That is the reason the majority of our students are starting to blossom by winning some of the competitions. Unfortunately, the arts are still white-dominated, even the art buyers are still white.”