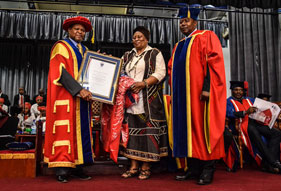 Honouring and remembering the resilient “Mother of Azania”

Honouring and remembering the resilient “Mother of Azania”

On Friday, 12 April 2019, the Vaal University of Technology (VUT) had the privilege of awarding a posthumous Honorary Doctorate to Ms Zondeni Veronica Sobukwe, who was also known as the Mother of Azania, for her role in the struggle for freedom in South Africa.

The late Mama Zondeni was married to fellow struggle hero, Mr Robert Mangaliso Sobukwe, whom she met when he came to address a nurses’ strike, led by her, at Victoria Hospital in Lovedale in 1947.

The couple was married on 6 June 1954 at St Paul’s Anglican Church in Jabavu and were blessed with four children: Miliswa, Dinilesizwe and twins Dalindyebo and Dedanizizwe.

The couple was well known for their fight against apartheid and Ms Zondeni’s husband was sent to Robben Island where he suffered a great deal. She actively campaigned against his ill-treatment and for his release, to little avail. While he was in prison, she had to be both mother and father to their four children. She also used her nursing skills to care for others in her community.

Mr Sobukwe was eventually released in 1969 and moved to Galeshewe township in Kimberley where he served a banning order. Their house was under constant surveillance by the apartheid police and the government refused to allow the family to leave South Africa when he was offered a lecturing post in the United States. the government also denied him proper treatment for cancer which led to his death in in 1978.

After his funeral, Mrs Sobukwe was thrown out of their house and eventually moved to her home in Graaff-Reinet where she died on 15 August 2018.

For many years her contribution to the struggle went unacknowledged, however, she was awarded the National Order of Luthuli in silver only months before she died.

According to a Sunday Independent report, “Mama Sobukwe received the national order award because of the unwavering efforts of the young activists of the Blackhouse Kollective who nominated her to receive the highest national honour in recognition of her unsung role in the fight against white supremacy.”

Professor Gordon Zide, Vice-Chancellor and Principal of VUT, has over the years built a relationship with the Sobukwe family and is currently a director of the Robert Mangaliso Sobukwe Trust. The VUT deemed it fit to confer an honorary doctorate on a woman who gave so much to this country, albeit quietly.

The degree was received by her niece Ms Fikile Mathe: “When she heard that she would be called a doctor, she was so excited but insisted that she was not alone’ and believed that the honorary degree is dedicated to all those who were with her during the struggle,” Ms Mathe said.’’