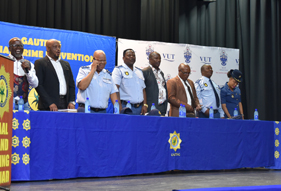 Delegates that formed part of the Men’s Conference

This conference brought together men, civil society, activists and, most importantly, organisations implementing gender-based violence response interventions, to gain a deeper understanding of the local context, share good practice and raise the voices of those most affected.

Studies have shown that one in four South African women experience violence at some point in their lives, that a woman is murdered by her intimate partner every six hours, and 28% of South African men have admitted to sexually assaulting a woman.

Under the theme #IAmNotYourPunchingBag, this initiative looked at joint efforts by men committed to supporting efforts addressing gender-based violence.

Bishop Ralekgolela, from the Gospel Fire Evangelistic Ministries, was among the speakers who gave their inputs, he said: “If you love yourself, you will not hurt anybody or turn a blind eye to abuse against women and children. Men should stand and position themselves against gender-based violence.”

Patrick Shai, actor and founder of an organisation Khuluma Ndoda, that helps men fight against gender-based violence, gave a touching story of how he escaped being an abuser. He mentioned that growing up in an environment where abuse against women was a norm, he perpetuated that violence towards his wife. “I saw the pain that I was causing my family, I saw the pleas from my sons who had reached out to me for support, and it was at that point when I knew that I needed to change.”

This conference also provided a local platform, where men from all walks of life could build knowledge, expand their network, create collaborations and share knowledge with key decision makers in the field.

In her vote of thanks, Gauteng MEC for community safety, Faith Mazibuko stressed the importance of social norms that need to change in order to stop violence against women: “It is your time now to champion against gender-based violence,” she said.