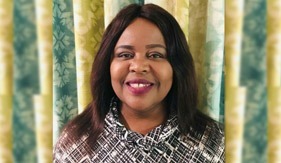 Situation can be changed because of dedication

Onica Thandi Matsheke was born in Witbank, Mpumalanga Province in 1968.  She grew up in a rural area called Bemoral with her grandparents. She then stayed with her parents and attended primary school at Mashigo Bantu School, moved to KwaNdebele where she continued with her studies at Nansidlela combined primary school. She matriculated at Vukani secondary school.

Her academic achievement began in a tertiary institution, Pretoria Technikon and completed at the Vaal University of Technology, where she obtained a National Diploma, Personnel Management; B-Tech, Human Resource Management and M-Tech, Business Administration. She further studied at the University of Free State and obtained an Advance Diploma in Higher Education (ADHE); Certificate of Business Incubation at the University of Johannesburg (UJ). She is currently persuading her the doctoral studies in Social Entrepreneurship.

Ms Matsheke is an enthusiastic and dedicated person, self -motivated and a go-getter. She always attends workshops to learn more as she believes in life-long learning. She is sociable, knowing that her networks are her net worth. Ms Matsheke holds a Masters (MTech) in Business Administration.

Her university experiences at VUT count much as she indicated that she is the product of VUT. The institution offers lots of learning opportunities and exposure. “It is up to an individual person to grasp those opportunities; I became an invigilator to become a junior lecturer” says Ms Matsheke. She has a positive experience with VUT whereby she was able to develop herself from within the institution by attending workshops. She was also given an opportunity to develop herself outside VUT via the financial assistance from skills development department within HRM.

Ms Matsheke takes the issue of community engagement as a serious issue where she is a Board Member of SANCA. Local Drugs and Substance Abuse Committee (LDAC) at Vanderbijlpark. She assisted Fast-vent, Vesco-Eco and BSF compannies in drafting job descriptions for their employees. She served as Faculty Co-Advisor for the VUT Enactus team since 2013 to 2017, Faculty Advisor from 2017 to 2021, conducting workshops that trained 12 companies that supply products and services to Harmony Gold Mine as part of Enactus engagement on entrepreneurship, human resource and strategy management. She cconducted workshops on Entrepreneurship and Business Simulation to students.

She also collaborates with private Companies:

The Entrepreneurship Challenge (TEC): 2019 sponsored by the following companies below:

Ms Matsheke is very towards her career. Her current job in entrepreneurship is not only for students in her faculty or department, it involves the inter- disciplinary or inter-faculty collaboration when coming to motivate or stimulate the entrepreneurial mindset to students.

Like everyone else, she passed through challenges during her way to success when she enrolled for tertiary education, being married, breastfeeding her second born, and having financial challenges as a family.

However, she managed to get a bursary because she was a hard worker but it was not enough, and  she had to go the library with her learner guide to make notes from the prescribed books,  hence she did not have challenges when coming to write assignments and tests. She travelled to campus daily whilst her mother and mother-in-law assisted with the children. Her studies contributed a lot to her achievements a lot as if it was not them, she was not going to be the entrepreneurship lecturer or coordinator of EDHE or the faculty advisory of Enactus.

Ms Matsheke believes in self-motivation, and besides the success of her students and the individuals that she assisted in starting businesses, motivates her to carry on with what she’s doing. She reminds other females, as we are in a woman’s month, that they should know that they are created out of the image of God and they are blessed (Genesis 1:27-28). They should not undermine themselves. Visualization comes to realization but you should put your hands on your thoughts. She quoted the saying from late president Nelson Mandela “It always seems impossible until it’s done.” She concludes by giving advice to the young generation where she mentioned that, they should take their career serious. They should also make sure that they learn something that they can apply in a real-life situation, not just to memorize the information and get high marks only.” I would have pursued my studies before I got married because I was working under pressure for my studies, house chores and looking after my children. If my parents were not available maybe, I would have stopped my career”.  Says Ms Matsheke in closing.