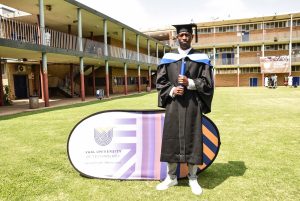 On Tuesday, 13 September 2022, the Faculty of Management Science of the Vaal University of Technology (VUT) had the honour of awarding an Advanced Diploma in Sports Management to Premier Soccer League player, Siyabonga Nhlapo.

This was the second VUT qualification for this talented SuperSport United midfielder – he first graduated with the University in 2011 when he obtained a national Diploma in Sports Management, which he completed in record time.

Born and raised in Meadowlands, Soweto, Siyabonga attended his primary days at St Martin Catholic School and later on, his talent in soccer earned him a place at Rosina Sedibane Sports School.

During his varsity days at VUT, he played for the University soccer team, and in 2010 he got the exposure that changed his life when they were playing a friendly match against Jomo Cosmos. His outstanding performance during that match caught the eye of the great Jomo Sono who immediately signed him outright on a five-year contract. In the same year, he also got the opportunity to put VUT on a continental map when he played University Sports South Africa (USSA)Tournament held in in Botswana.

During his successful career at Jomo Cosmos, he won the National First Division (NFD) League 2010/111 season: young player of the season and midfielder of the season. He later joined Bidwest Wits and won the league’s MTN 8 CUP.

To date, Spartan, as he is affectionately known by his teammates, has 16 Bafana Bafana caps.

While playing for Bafana Bafana, he became one of the team players representing the country at the 2015 Africa Cup of Nations in Equatorial Guinea.

In his current, SuperSport United, which signed him in 2017, he has already won 2 MTN 8 cups and played CAF Confederation Cup final against TP Mazembe from Congo.

For the 34=year-old, sport is a passion and he studied Sports Management to enable him to do any sport administrative work at school level or in the corporate world. He believes that it is time for soccer to have graduates. “I pushed myself to study due to the lack of educated professional footballers in management positions in football,” he said, adding that he would like to advise youngsters to seek advice about which courses to enrol in as athletes and have something to fall back on when their sporting careers are over.

During his studies, Siyabonga said that he didn’t have much of a challenge as it was during COVID-19 times, and he attended online. He said this was an excellent time for him as he had time for his practice sessions and studies. Siyabonga also emphasised that student-athletes should take their studies and their sport seriously, especially the Varsity Cup games, as they as they offer a great platform of exposure because they are televised.

In conclusion, Siyabonga said: “It is important to balance my career as a professional athlete with my studies. I cannot rely on football forever, and my qualification will open doors for me to apply and get training or internship at companies and be equipped to perform and meet the requirements”.

He plans on serving the PSL and being involved at grass root level in sports development under School Sports, especially in the Government sector.