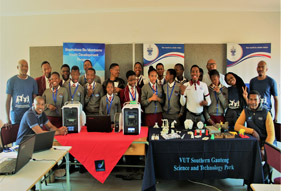 Printing bridges for gaps in technology

Printing bridges for gaps in technology

3D printing technology is part of the current transition in modern industries as part of the Fourth Industrial Revolution (4IR). VUT’s Southern Gauteng Science and Technology Park plays a role in introducing the technology to different stakeholders, such as students, learners, community members and employees.

Training at the school was under the supervision of Deputy rincipal Mrs Anna Nonkie Mogobye, who is also the Departmental Head of Mathematics and Science and was made possible by the Baphalane ba Mantserre Non-Profit Company (NPC) under the Local Traditional Council.

The purpose of the Baphalane ba Mantserre Youth Development Programme goes beyond schooling by informing, involving, collaborating and empowering young people as well as the community of Mantserre to tackle social challenges. The NPC was created by the community for the community.

It also aims to find out which part of the school curriculum is of interest to learners, in order to prepare them for the future.

The Public Relations Department at the Science Park initiated the relationship with the NPC and works in partnership with them to train learners from Grade 8 to Grade 12.

VUT is your world to a better future, and it leads by example when it comes to technology and training and is proud to be part of growing communities through its initiatives.

The second school training session will also follow once the date has been set.