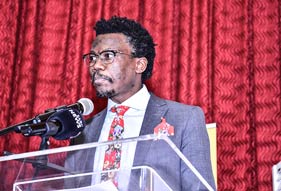 The Vaal University of Technology (VUT) hosted its first Memorial Lecture of Boipatong on 5 July 2019. Students, staff members and community members were all part of the notable event which commemorates the brutal Boipatong Massacre of 1992 when 45 innocent people were assassinated and which almost derailed talks between the ANC and the apartheid government.

The lecture aims at promoting the liberation heritage display at the Boipatong Memorial Monument. VUT Vice-Chancellor and Principal, Professor Gordon Zide gave guests a warm welcome and said: “This memorial public lecture is to honour those who paid a heavy price and died for a good cause. I am happy we are remembering the brutal Boipatong Massacre in this manner.” He added: “This is Africa, this is our continent and therefore we should be proud of who we are as Africans, we should cherish an Africa free of violence, free of destitution and fr ee of illiteracy.”

Advocate Tembeka Ngcukaitobi, who is also a public speaker, author and political activist, described exactly what happened on that fateful day.

Due to political differences between parties, the Joe Slovo Informal settlement in Boipatong outside Vereeniging was attacked by a group of about 300 armed men from Kwa Madala Hostel in nearby Sebokeng township on 17 June 1992. In response to the massacre, the ANC withdrew from the negotiations with the National Party, blaming the government for the attack.

“The slaughter left 45 people dead and approximately 40 others injured; there was damage to houses and other properties; and there was extensive looting and theft from people’s homes. The attacks were violent; the assailants used axes, spears, knives, guns, automatic rifles, AKA47s and any instrument that is used to kill,” said Advocate Ngcukaitobi.

“Windows of different houses were smashed, residents were assaulted (and murdered). The nature of the attacks was extraordinarily violent and an overwhelming majority of the victims were women and children.

“It is now known that the attacks were systematic – they were carried out by people who knew how to master and carry out violence. A disinformation campaign was co-ordinated, by what was then known as strategic communications or ‘stratcom’. The campaign used three things as an explanation for the attacks. Firstly, that this was a war between the Zulus and the Xhosas, secondly, that it was a political war between Inkatha Freedom Party (IFP) and the African National Congress (ANC) and thirdly, that it was a conflict among local residents and hostel dwellers. But, with the benefit of history, we know that none of these were adequate reasons to explain the massacre,” he explained.

In conclusion, he said that people should not be separated by tribal identities and that no revolution will succeed unless it is embedded in honesty. It is the memory of significant events and places that has kept South Africa alive and that is what we should remember about Boipatong: a central pivot in the struggle for democracy.