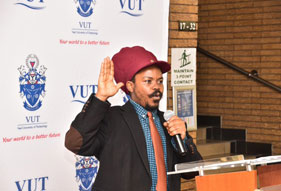 Mr Thando Sipuye, the Volunteer and Programme Co-ordinator of The Robert Sobukwe Trust

Vaal University of Technology (VUT) hosted a second annual lecture in tribute of Mrs Zondeni Veronica Sobukwe, who lived her struggle life to the full.

Mr Thando Sipuye, the Volunteer and Programme Co-ordinator of The Robert Sobukwe Trust, was invited to come and speak about the late “Mother of Azania”, as she came to be known – who was the wife of Robert Mangaliso Sobukwe, the founder of the Pan Africanist Congress (PAC).

Robert was a teacher, lawyer and a lecturer at Fort Hare University and was well known for his role in the liberation of this country. His political activity, however, brought much pain to his home as Zondeni had to raise children alone when he was sent to prison.

Zondeni, a nurse by qualification, actively campaigned against his ill-treatment in prison and for his release, to no avail. While he was in prison, she had to be both the mother and father to their four children and she also used her nursing skills to care for others in her community.

She played an important role in the struggle for freedom and managed to stand against all odds. She died during the month of September 2018 at the age of 91. She was an inspiration to many, including Mr Sipuye who spoke about her life and her contribution to the fight for freedom in South Africa.

Mr Sipuye said that the Trust realised that while much had been said and written about Robert, not much had been recorded about the person who stood by him and allowed him to fill his important role as well as being active herself.

The Robert Sobukwe Trust therefore made it to their mission to celebrate Zondeni every year, during Women’s Month, encouraged by Justice Yvonne Mokgoro, the former Judge of the South African Constitutional Court who said: “her story must be told”. 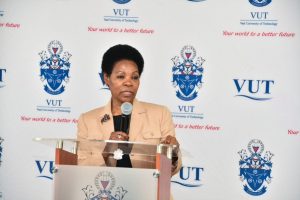 Judge Mokgoro, who had been inspired by Robert to study law, said that Zondeni’s role is often overlooked.

“In many cases we hear the story of Robert Mangaliso and how he led the strikes, but there are not many times we hear how Mama Zondeni supported her husband, we hardly hear what she did, only what her husband did. There is a need for us to honour our struggle icons – men and women – and thank them for the work they did. Mama Sobukwe led a life of activism and was a very strong woman and this is why her story must be told”.

Dr Paulina Machika, the Executive Director at the Centre for Academic Development (CAD) concluded by saying that the reason she attended the event was because she believes in stories of strong women. She thanked all the speakers who participated and said that Mr Sipuye, who introduced us to the world of Mama Sobukwe, had set the bar very high. She said that she concurs with Justice Mokgoro when said her stories cannot be left untold and that we need to bring more stories to light.