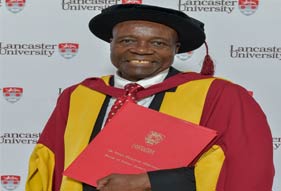 Each year, Lancaster University awards honorary degrees to people with outstanding international, or leading national, reputations in their fields. In July 2019, the university awarded honorary degrees to four eminent individuals. One of these individuals, was Dr Xolani Humphrey Mkhwanazi, who is the Chancellor of the Vaal University of Technology.  The university conferred the degree of Dr of Science honoris causa for his outstanding leadership contributions to Maths and Science Education Development, and energy and mining business arenas, especially in South Africa. Dr Mkhwanazi is a former Executive Chairman of the Southern African arm of the global BHP Billiton resources company. A significant responsibility given that South Africa has the largest mineral reserves in the world. He obtained his junior degrees in Physics and Mathematics from the University of Botswana and subsequently worked as an Assistant Lecturer at the University of Swaziland before joining Lancaster University in 1978. He holds MSc and PhD in Physics from Lancaster University in the United Kingdom.

Dr Mkhwanazi rose rapidly through the business and national ranks when he joined the Atomic Energy Corporation as a Senior Scientist. He then moved to the Council for Scientific and Industrial Research (CSIR) as Technology Transfer Manager and became the Chief Executive Officer of the National Energy Regulator, tasked with building it into a reputable Regulatory Authority in Africa. “With this firm foundation, he has become an important figure for the rebuilding of South Africa after apartheid and is now a leading global figure in science education and business arenas”, said Prof George Pickett, Professor Emeritus of Lancaster University, in his citation for the award.

Dr Mkhwanazi was honored alongside fellow alumni: Mr Andy Serkis, a world-renowned actor, director and producer, who has contributed towards the development of a younger generation of film makers and performed in Lord of the Rings, Star Wars and Planet of the Apes. The third awardee is eminent Physicist, Prof Sir Steven Cowley, a theoretical physicist and international authority on fusion energy, who became the seventh Director of the Princeton Plasma Physics Laboratory in July 2018, and Princeton Professor of astrophysical Sciences in September 2018. The fourth awardee, Dr Frannie Léautier, currently the Chief Operating Officer at the Trade and Development Bank, is a finance and development expert, with global experience leading and transforming organizations in the private, public and not-for-profit spheres. Dr Léautier holds positions at prestigious, international organizations including the World Economic Forum, Massachusetts Institute of Technology, African Economic Research Consortium and the Nelson Mandel Institute for Science and Technology amongst others.

In South Africa, Dr Mkhwanazi is the first recipient of the prestigious National Science and Technology Forum (NSTF)’s Ukhozi Award. He was recognized for his essential input to the NSTF and his contributions within the country. During the Graduation ceremony, Dr Mkhwanazi reminisced of almost 41 years ago when he first made his arrival at the University, to commence his postgraduate studies at the Department of Physics. “I was truly humbled when I received a letter on 5 June 2018 from the Vice Chancellor Prof Smith, informing me of being recognized by my very own institution… I had the privilege of being taught, mentored and guided by the sharpest, smartest and most respected technical minds of the subject. I am grateful for the knowledge I have acquired from them,” said Dr Mkhwanazi, delivering his acceptance speech during the ceremony. He thanked his teacher and mentor of physics Prof George Pickett for believing in him and recognizing his contribution to Science and Technology Development, as he boasted that he learned from the best and is still applying the knowledge that he gained from Prof George even today.

In his acknowledgement address during the graduation dinner, Dr Mkhwanazi thanked the Chancellor, The Right Honorable Alan Milburn on behalf of the four recipients of honorary degrees, for the awards bestowed on them. He made a commitment on their behalf to continue to serve the broader community as Lancaster University alumni.  In closing, he quoted Dr Nelson Mandela who said, “Education is the most powerful weapon which you can use to change the world”.  “Long may Lancaster University continue to contribute to positive change”, he concluded.