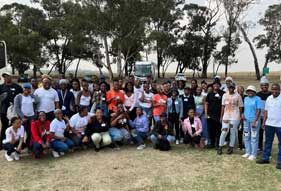 Chemical engineering students from the Vaal of University of Technology (VUT) recently visited the Sasol Secunda Plant, where coal is converted into synthetic crude for petroleum, producing roughly 160 000 barrels per day.

During the visit, students were given a tour of the plant as one of the ways that lecturers within chemical engineering department, through the society of chemical engineering students, believe will help students better grasp their course and get a clearer picture of what their careers would entail.

According to Simphiwe Zwane, the president of the Society of Chemical Engineering  (SoChES),  structure organised the visit. During the tour, students were shown product pipes which have the capacity to circle the globe twice. Plans for the plant were also discussed during the visit of which the students found to be quite fascinating.

“The plant intends to produce fewer greenhouse gases, by moving the plant completely off the grid, thus finding a way to utilise the CO2 that is created. It appeared that Sasol researchers and scientists are already engaged in the project. The final proposal calls for the addition of a third production unit, allowing the older ones to be shut down,” said Awande Gumbi, a first-year student.

“We’ve learnt about how Sasol produces diesel and the processes involved, also learnt about safety management in the plant,“ Simphiwe said, adding that the goal for the visit was achieved and that the students left the plant motivated and inspired.

“I have learnt that the chemical engineering field is very fascinating, and it includes numerous departments that are a component of various engineering fields. I’ve come to see the value of teamwork and the significance of the Safety Management module in our academics. My knowledge was greatly impacted by the drive-thru encounter. I now know that both humans and animals can reside close to a plant. Additionally, separate reservoirs or containers are painted with various colours, such as black and white, to regulate the temperature and that women are in high demand in the departments of chemical engineering is the most illuminating information we’ve received from Sasol, and it really demonstrates that opportunities are available for young women and that Sasol is willing to develop young engineers and technicians, said” Annegreat Ratau, another first year student.

ABOUT THE SECUNDA PLANT

Secunda Plant consists of two production units. The Sasol II unit was constructed in 1980 and the Sasol III unit in 1984. The plant is both the largest coal to liquid plant and the largest point source of greenhouse gas emissions in the world. Secunda Operations receives coal from five mines in Mpumalanga.  After being crushed, the coal is blended to obtain an even quality distribution. Electricity is generated by both steam and gas and used to gasify the coal at a temperature of 1300°C.

The plant produces syngas from which two types of reactors, the circulating fluidised bed and Sasol Advanced Synthol reactors. The Advance synthol reactor produce components for making synthetic fuels as well as several downstream chemicals. Gas water and tar oil streams from the gasification process are refined to produce ammonia and various grades of coke respectively.