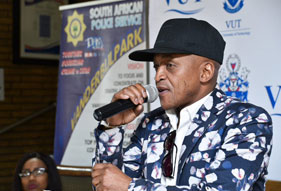 Gender-based violence has once again hit the headlines with women being kidnapped, physically abused, emotionally abused, raped and murdered. What has gone wrong?

Gender -based violence is a deep and general problem in South Africa, affecting almost every part of a woman’s life. It is an evil that affects women and girls around the world and is intensely rooted in institutions, cultures and traditions. It arises as an outcome of normative role expectations and unequal power relationships between genders in a society.

In addressing these issues of gender-based violence, equality and crime prevention, the Department of Arts and Culture, together with the Department of Social Justice and Transformation, hosted a dialogue about such issues under the theme #RespectMe. The event took place on Friday, 30 August 2019 at the Desmond Tutu Great Hall, Vanderbijlpark campus.

In his opening and welcoming address, the Vice-Chancellor and Principal: Professor Gordon Zide emphasised that the end of Women’s Month is not a signal for men to do as they wish from now on. He said that it’s women’s day on a daily basis. He further stated that real African men do not rape, do not abuse women and children and they listen when a woman says “NO” and that she means “NO”.

This important event was graced by the presence of the MMC of Public Safety in the Sedibeng Municipality: Yusuf Mahomed; Mr Dumisani Dlamini “Mbodla”: Isibaya actor; Dr Motlalepule Nathane: Senior Lecturer Social Sciences at Wits; Brigadier Nikiwe Hoeane: Station Commander at the Vanderbijlpark SAPS; and Ms Refiloe Mathloko: author of the book Beyond Hopes and Dreams.

Mr Dlamini shared his personal story of how his father murdered his mother while he was away on a shoot for Sarafina. He explained that through all this experience, he has learnt that forgiveness is important. In supporting his statement, Ms Mathloko said that we need to understand the greater purpose behind the experience and be unapologetic about womanhood. 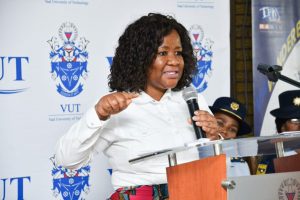 MMC Mahomed suggested that more programmes like this are needed for young people, to teach them and use them to build a better generation. In addition, Dr Nathane advised the students to believe the perpetrator the first time (when abused) and also advised men to know that “it’s ok to be vulnerable and not to bottle up issues”. “Sister solidarity is important” she said and recommended that people should stop putting pressure on young girls.

In closing, Brigadier Hoeane warned students not to drink too much alcohol and to take responsibility for their safety. She said: “Ziqoqe… uzifumane”.

The audience had a chance to interact with the panellists, asked questions to gain clarity on matters they had shared with the audience. Mr Joseph Radebe: Social Cohesion Advocate gave a vote of thanks to all participating departments, partners, staff and students who attended the event. 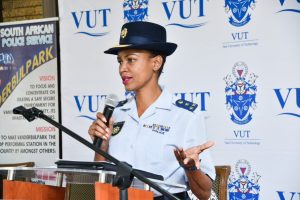