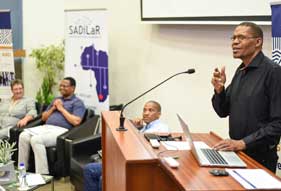 In efforts to support multilingualism in the South African higher education, the Vaal University of Technology (VUT)’s African Languages Development Unit within the Centre for Academic Development (CAD) hosted a Language Resources Audit.

Conducted by the South African Centre for Digital Language Resources (SADiLaR), the audit was held on 22 November 2022 at the CAD African Languages Auditorium.

SADiLaR’s mandate through the Community of Practice for the Teaching and Learning of African Languages (CoPAL) in Higher Education, Universities South Africa (USAf), is to implement the Department of Higher Education and Training (DHET’s) New Language Policy Framework for Public Higher Education Institutions.

On the day, the VUT community gathered to learn how the DHET’s new Language Policy Framework for Public Higher Education is aimed at promoting and strengthening the use of all official languages across all functional domains of public higher education including scholarship, teaching and learning as well as wider communication in line with Section 29 (2) of the South African Constitution.

The audit, in short, aimed to gauge what resources are available at the University, what is still required to support the implementation of the policy and what milestones have been achieved or success stories that can be shared for the benefit of the higher education sector.  On the other hand, the site visit focused on obtaining more qualitative data in a form of questions, concerns and potential ideas that would aid the sector wide implementation of the new policy framework.

Two sessions were held, one with management of the University and staff members, and a second one with students. This would enable broad input – not just from an implementation and institutional policy perspective, but also how students view the potential impact of the policy.

In his welcoming address, the VUT Vice-Chancellor and Principal, Prof Dan Kgwadi said: “Languages should be treated equally. All languages are as important as others – it’s imperative to develop languages, not only at university level but at the societal level as well.”

Adding to the VC’s remarks, Prof Maggie Linington, Deputy Vice-Chancellor responsible for Teaching and Learning at VUT, stated that the eight values outlined in the policy framework should be aligned to serve as sources of knowledge. “Until we do that, the injustices in the issues of languages will remain. In addition, languages are part of our identity and if we honour our languages, we will be honouring our identities,” she said.

Delivering the keynote address, Prof Langa Khumalo: Executive Director at SADiLaR, explained that the Framework is unique, it has no escape clauses, it views language as a vehicle for Teaching and learning. “The imperative is to improve epistemic access. Ultimately address attrition by improving student success,” he said. He further stated that “In line with SADiLaR’s mandate, the framework seeks to stimulate and enable digital research and development in South Africa’s 11 official languages, to cultivate and grow the DH scholarship in South Africa and the continent, while creating strategic synergies with local and international partners with similar or complementary infrastructure.”

During the engagements, a sentiment that came out strongly was that expanding access to multilingual resources should not just be confined to higher education alone. More should be done to enable further expansion within the basic education sector as well. Multilingualism affords multiple avenues for accessing, assimilating, and conveying knowledge.  Lastly, all universities should have a national bank for all universities to draw information from to prevent repeating what’s already there.

Two questionnaires were completed online – one focused on students and the second one on management and staff at the university. The questionnaires covered areas of what language services are available, how teaching and learning take place and how multiple languages are used as part of communication and administration in curricular and extracurricular activities.

Prof Khumalo further reiterated that in the next steps of the audit, the preliminary results will be reported at the VCs Colloquium which will be hosted by the University of Pretoria (UP) on 1 and 2 December 2022. The Colloquium is expected to take the conversations forward on identifying and sharing resources for successful implementation.

Lastly, the audit was concluded with a walkabout to the VUT’s writing and computer labs.

“Although the university lacks in resources, and behind with so many things, there is however a language policy in place, and it is currently at a stage where the team is conducting road shows for the university community to know about the policy,” said Jacob Thamaga, Acting Manager: VUT African Languages Development Unit.