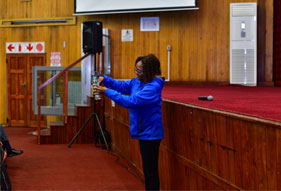 The Vaal University of Technology (VUT)’s Chemistry Department held a Science Week for high school learners from various schools around the Vaal from 29 July to 2 August 2019.

The event formed part of the National Science Week (NSW), an annual event led by the Department of Science and Technology (DST) celebrating Science, Technology, Engineering and Maths (STEM). It attracts thousands of learners and members of the public to workshops, science shows and lectures, which are held at universities, schools, science centres and public facilities countrywide. The aim of the NSW is to exhibit and communicate awareness of these disciplines.

Each year a different theme is chosen and activities are planned around the theme to the target audiences. The theme for 2019 is “Facing the harsh realities of climate change.”

Among the schools invited, were Thuto Lore Comprehensive School, Lekoa Shandu Secondary School, Residensia Secondary School and Suncrest High School. Among exhibitors who made an impact by exposing the learners to the wonders of maths and science and encouraging them to consider a career in the STEM fields were, the Chemistry, Non-Destructive Testing (NDT), Biomedical Technology departments and Arcelor Mittal Science Centre. 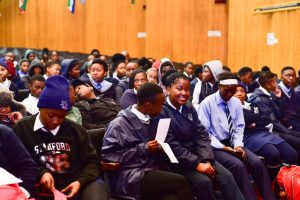 Some of the learners that attended the Science Week

The enjoyed the different science experiments: “Science is very interesting and has a lot of career fields to choose from, coming here has really changed our perspective,” one learner commented.

The National Science Week was sponsored by the DST, the National Research Foundation (NRF) and South African Agency for Science and Technology Advancement (SAASTA).

“We believe the purpose was served throughout the week and the learners left the University’s premises feeling motivated to pursue careers in science,” said Ms Kgomotso Mtshatsheni from the