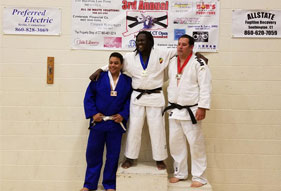 Antony M’bepa, a third year Mechanical Engineering student begun his journey to global dominance in impressive style. He was invited to take part in the Central CT Judo Open tournament in Connecticut New Britain, USA (United States of America). The tournament was a competition between the North Eastern States of the USA featuring 140 judokas (judo practitioners) with Antony being the sole international athlete, making it 141 competitors in total. He literally got off the plane in the morning (5 May 2019) in New York City (NYC) and drove to the tournament to compete that same day.

‘’Things went the way I planned them to go with a quarter final in less than four seconds against Cuba. In total, I had seven fights, seven wins; leading me to the final. During the first fight I had quite a hard time against a gentleman from Mexico, who was on three wins by Ippon (the highest score in judo, that once awarded, ends the match in favour of the athlete who scored it). The fight took six minutes although I didn’t expect any long fights, but my opponent was strong. I got my opportunity to score a Wazari (the second highest score a judoka can score) during Golden Score, giving me a win. Things started flowing from there with my final lasting one minute and few seconds against a USA player.’’

Antony won a gold medal in the tournament and was subsequently interviewed by JUDO USA, who gave him a license with their federation. He also had an interview with a sports TV channel which was a great opportunity. Our champion is now looking forward to going on to bigger conquests until he gets to the 2019 World Championships in Tokyo, Japan. ‘’But I can’t do it alone really, I can’t. The expense behind all this is just so much but I know I’ll find a way and make it.’’

Should he do well at the World Championships, it will allow him to qualify for the 2020 Olympic Games in Tokyo, Japan. Antony is confident that this will come to fruition and judging by the way he’s able to dominate top class judokas, we have no doubt that he will be a force to be reckoned with at the Games.