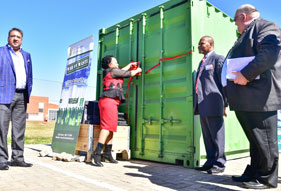 The project is aimed at addressing unemployment in townships around the Sedibeng District Municipality, while simultaneously developing new technology for E-Waste recycling.

“Today marks one of those exciting moments in the history of our university. The E-Waste Project has become one of those in the past that has not been given the recognition it deserves. As time evolves, we have come to see the importance of e-waste. This launch gives VUT an opportunity to move, and become one of the best in the Southern Gauteng,” said Mr Subash Dowlath of SDB Holdings.

During his welcoming speech, Professor Gordon Zide, VUT Vice-Chancellor and Principal said that the launch of this project gives VUT an opportunity to move to be one of the best in the Southern Gauteng.  He further mentioned that as a VUT community, they envisage to have an academic programme from certificate to PhD in e-waste management through the Faculty of Applied and Computer Sciences under the leadership of the Executive Dean, Prof Raymond Mabuza working hand in hand with Dr Joseph Molete the Executive Director of the Science Park. Prof Zide is of the view that a University without its presence felt, would not enjoy its beauty.  As a University, we would like to grow this project in the Sedibeng District Municipality and the country.

Prof Zide took pride in mentioning that this project is launched during Africa Month, a time where Africa is celebrating the richness and diversity of it continent mentioned and at a time when the importance and relevance of Africa is recognized.

The launch was an extraordinary event that brought together all the stakeholders who are keen to see the success of this initiative. They expressed their appreciation for being part of the project. Moreover that it is poised to change lives of the community through skills training and research opportunities in the sector. The spin-offs will ensure that there are formal qualifications which seek to address the gaps and offer employment opportunities to our community and grow the waste sector.

The Director in the Office of The Executive Mayor, Mr Archie Mokoenane introduced the long serving Mayor of Sedibeng Cllr Busisiwe Modisakeng, who made a huge significance to the launch by delivering a Key Note Address to officially launch of E-waste Project on behalf of Minister Edna Molewa of the Department of Environmental Affairs. She mentioned that Tirelo Bosha is an idea which is warmly welcomed in the Sedibeng District Municipality as part of compliance with the legislation.  “I thank the government for choosing VUT and the Sedibeng District Municipality to start this project.  The Deputy President had promised to engage the Premier of Gauteng to uplift the environment” said Cllr Modisakeng.  In closing, she congratulated Minister Molewa for choosing VUT to launch and roll-out this project which will benefit the community and students.

The waste sector has been globally identified as one of the critical sectors with the potential to contribute substantially to the generation of jobs and promoting green economy. This significant milestone will be living proof that domestic E-waste management can contribute towards job creation, catalyzing of economic growth and creating a greener environment for all. Electrical goods can reach their end of life, but through E-Waste management and sustainable partnerships, they can be recycled and be of significant use to various parties.

The launch concluded by both the Prof Zide, Vice-Chancellor and Principal and the Clls Modisakeng, Executive Mayor of Sedibeng District Municipality cutting of the ribbons to officially open both containers.  Prof Zide had an opportunity to test the engine of the bakkie (name and model) which was donated as part of the project. The bakkie will be used to collection e-waste material and other logistics related to the project.