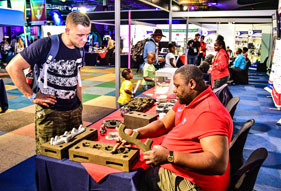 VUT shows off at Rand Show

VUT shows off at Rand Show

The Vaal University Southern Gauteng Science and Technology Park (VUTSGSTP) exhibited at the, Rand Show which was held at Nasrec Expo Centre in Johannesburg from Friday, 19  until Sunday, 28 April 2019.

The Rand Show remains South Africa’s largest, most iconic consumer event that has entertained multiple generations of South African families and tourists annually. This year it celebrated its 125th  anniversary.

VUTSGSP exhibited with 10 other VUT departments that are contributing significantly to the lives of people around it: Additive Manufacturing (AM); Idea2Product Lab (I2P); the Design Department; the Centre of Footwear Entrepreneurship (COFE); TTI Wellness; E-Skills; Casting Simulation Network (CSN); the French South African Schneider Electric Centre (F’SASEC); and the Industrial Engineering and Chemistry departments.

The exhibition gave the departments the opportunity to engage with potential customers and other players in the sector to create connections for future business and to share information.

Mr. Hanyani Makhuvele: a technician from the Energy Optimisation Unit (EOU) said: “The Rand Show was a great opportunity to introduce people to the services that the EOU has to offer. The Rand Show also serves as a platform to educate people and in turn understand the needs of people”. Ms.  Smatty Mzila, a Somatologist, from TTI Wellness Centre, said that the reason that they came to the Rand Show was to introduce their aromatherapy treatments and the benefits of essential oils to the public. She said that most people get confused when they hear the word “massage”. They think it is a luxury to have a massage or aromatherapy treatment. So, they had to dispel this myth and explain the value of aromatherapy.

The show was hailed a success and all the departments managed to attract a lot of people to their stands. The first-time exhibitors were happy to be part of the extravaganza and enjoyed showing their institution in a positive light.