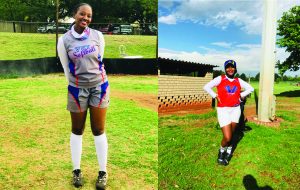 Two (2) students at Vaal University of Technology have been selected to be part of U18 South African Softball team, playing in Lima Peru from 3 – 14 December 2021.  You do not only represent the country, but also as VUT ambassadors. You are our leaders, the alumni of tomorrow. Go on and shine amongst your peers and do your best. Don’t just play; but learn, gather experience and enjoy.

Moshibudi (Shibu) Mswazi, is a sport fanatic who stand out to be the best amongst her peers in softball. She describes herself as an introvert who loves to read novels and watch movies. She was born and raised in Limpopo, Zebediala Moletlane, matriculated at SJ Van der Merwe Technical High School, currently a 1st year Cost and Management Accounting student.

“When playing softball, I first played for my hometown team Moletlane Texas and got the opportunity to represent Limpopo in the provincial games. I am currently playing for VUT ladies’ team, and I have been selected to represent South Africa in the world cup in Lima Peru, South America”.

Before being selected she was invited to a camp held at Red Sox, Kempton Park, where players from different provinces played against each other.  The camp changed her life story and helped her to achieve her dream by playing for the South African team.

After competing at provincial games, she received a letter confirming that she will be part of the U18 South African team. “When I got the letter, I couldn’t believe my eyes. I was so happy and proud of myself at the same time. I think it will really sink in that I’m going to Peru when I’m on the plane. This has given me a chance not only to play with other ladies but a chance to travel and explore other countries”, said Shibu with a smile.

Shibu feels that she has accomplished one of her life dreams by being part of the South African team and striving to be the best player, like her mom. She said that she has set more future goals and one of them is to continue succeeding in her career and gain more experience and maybe one day to be a softball coach.

When questioned about her trip expenses, Shibu said that All expenses will be covered by Softball South Africa except apparels which is for the account of each player.

The second player; Mmahiine Koketso Ramaila, is a Pedi woman originally from Mphahlele but grew up in Katlehong, Palmridge. She’s a 1st year VUT student, studying for her diploma in Logistics.

Kokesto, also one of the softball players who have been playing for the past 6 years, will be representing South Africa for the second time in Lima Peru. She was first selected in 2019 to represent South Africa in California, America world cup games, where she performed well.

She described herself as a go-getter, a person who is passionate about what she wants. Koketso mentioned that it was challenging for her to play softball as she was raised by very strict parents who believed more in church and education.

Koketso played her games and training privately, without her parents’ permission which resulted in leaving early for games and practices before her parents returned home and notice her absence. Through the enthusiasm she had in sport, her coach encouraged her to approach her parents, to ask for an opportunity to play.  To her surprise they fully supported her.

At that time Koketso couldn’t understand why her coach was supporting her, but today she is reaping the fruits of her hard labour.

“I love softball because it teaches the importance of teamwork. I am also learning more about the nature of failure or win/lose in a game and how to cope with it, no matter how good I may be in my games”, said Koketso.

She further mentioned that softball has helped her to look at life with a different eye and helped her to set her vision very high by helping young kids from disadvantaged families. She would like to show them that there is more to life than being in streets and taking drugs, “My biggest dream at this age is to have an NGO.  This way I will be equipped to help disadvantaged kids through donations from companies and any organization willing to partner/donate and change lives.  I trust that this will also encourage them to finish school while playing softball” she said.

When questioned about her trip expenses, Koketso said that she is currently looking for a sponsor to pay for her apparels.  She has sent letters to potential sponsors, even though she hasn’t received responses, but she will stay positive.

She said that she will continue to have faith with the hope that a good Samaritan will respond to her request. Koketso mentioned that this is not an opportunity every child gets, but as a black child, it has been an honour to be given a chance again to go and represent hundreds of girls. She said that she is very excited, and it is a blessing to share a field with other 15 more strong girls who will be representing South Africa during world cup.