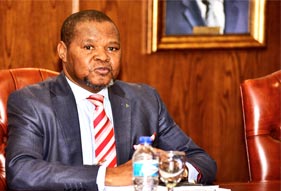 Professor Gordon Zide, the Vice-Chancellor and Principal of the Vaal University of Technology

Professor Gordon Zide, the Vice-Chancellor and Principal of the Vaal University of Technology addressed the Somali National University graduation ceremony which was held on Monday, 24 June 2019. This auspicious occasion was attended by people coming from all over Africa and Europe.

Attendees consisted of Vice-Chancellors and Principals from a number of African Countries, Heads of State, Representatives of the AU, EU as well as the UN.  There was an equally number of Ambassadors as well as the Deputy Minister of Education in Italy.  Mr Abdi Halane Hirsi represented the South African Somali Embassy.

Professor Gordon N Zide was accompanied by Professor Abdul Egal, the Director of VUT’s Sustainable Livelihood. Speaking on behalf of the international community, Prof Zide’s address was based on the theme: the magic of imagination. In his address, he firstly congratulated the new Graduates and highlighted that their role as graduates should be to develop Africa and its people. Prof Zide, appealed to the Graduates to “Imagine the Magic of Imagination” by seeing themselves as Ambassadors of Africa and therefore ploughing back to Africa their recently and newly acquired skills.

In the promotion of “the Magic of Imagination”, Prof Zide also appealed to the International Community to Imagine and Think of a New Sustainable Africa, an Africa reborn, an Africa re-crafted and an Africa rejuvenated – these were the words spoken by Robert Sobukwe at the Graduating Class of 1949 at the University of Fort Hare. He further appealed to the SNU, 2019 Graduating Class by advising it that even the Late President of the Republic of South Africa, Dr Nelson Mandela cherished the importance of Education as was the same with other African Leaders like Julius Nyerere, Kamuzu Banda, Kenneth Kaunda, Kwame Krumah and many others.  It was therefore in the interest of the African Continent that the Graduating Class of 2019, should Imagine the Magic of Imagination of the Dawn of a New Africa.

This passion for Africa made the audience stand up and gave him, a big round of applause; as he also made a passionate plea to the new cohort of Graduates to prepare themselves for taking over the reigns of running the Affairs of the Continent from the Current aging and exiting leaders. These leaders have played their role in driving the Africa 2030 and Africa 2063 Agenda and that it was now time for the new and the younger generation to come up with practical and not theoretical solutions to the challenges facing Africa.

After the Ceremony, Prof Zide was invited by the Rector and the Minister of Education to participate in a Higher Education Conference to be held at the Jazeerah Hotel, Mogadisho from 23 July to 25 July 2019, as one of the Panel Members to preside over the National Dialogue on Higher Education and emerging challenges facing the African Continent.

Finally, Prof Gordon Zide was awarded a Life-time Award by the President of the Federal Republic of Somalia who is also the Chancellor of the Somalia National University, for his “Outstanding Achievement” in recognition of his outstanding contribution and support to the rebuilding of the academic staff of Somali National University.