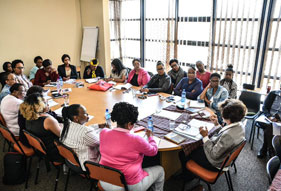 Women discuss challenges and solutions to their social life

Women discuss challenges and solutions to their social life

VUT women in a round table discussion

On Wednesday, 28 August 2019, the unit for Community Engagement at the Vaal University of Technology (VUT) held a round table discussion about the worth of women for the phenomenal women at the institution.

The discussion was facilitated by a clinical psychologist, Mrs Ha du Plooy, and focused on topics such as life, careers, health, marriage and social norms.

Mrs Du Plooy focused on relationships and marriage and gave different tips on building, working on and maintaining them.

She emphasised the importance of re-romanticising to keep the spark alive in marriages. In doing so, she said that: “It is a wife’s task to re-romanticise and so that both needs are satisfied and have a sense of worth”.

In closing, she also mentioned that a woman must stand the test of time to understand her worth.

Ms Rethabile Lechela, Director, Founder and writer of Beautiful Scar Media said that women need to find “self” in every situation. She further stated that women need to know who they are and what they want, rather than depend on finding love in a man. They should love themselves first instead.

She also suggested that men should be invited to such dialogues so that “we” as women could better understand any anger, bitterness and brokenness that they go through.

The dialogue opened to the floor which created an opportunity for women to opening up, share their problems and advised each other on how to handle their different situations.