“No matter where you are from, your dreams are valid…” the quote by Lupita Nyong’o; Kenyan actress and film director and Yale master’s degree graduate, best describes Mahadi Lesaoana’s life story.

Award winner aims to be a catalyst of change 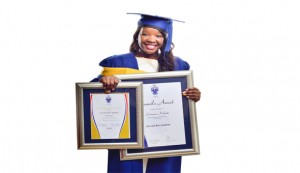 “No matter where you are from, your dreams are valid…” the quote by Lupita Nyong’o; Kenyan actress and film director and Yale master’s degree graduate, best describes Mahadi Lesaoana’s life story.

Mahadi, 23, is the sixth child of Mataemane Christina and Mothosele Julius Lesaoana’s eight children. She started her primary schooling in 1999 at Motlotlo Primary School in Sebokeng. It was during this time that she developed a passion for chess and soccer and went on to win many accolades in both activities at junior level.

Mahadi attended high school at Botebo Tsebo Secondary and completed her matric in 2010. She excelled in Maths and Science and received the school’s first Best Student award. She was later selected to represent her school in the Matrix Uploaded Maths Challenge which was broadcast by the SABC. Mahadi also excelled in Accounting and, as a result, she was chosen to participate in the Thuthuka Development Programme established by the South African Institute of Chartered Accountants (SAICA).

In 2009, in recognition of her dedication, outstanding leadership and personal qualities, Mahadi was nominated as the Chairperson of Emmanuel Roman Catholic Church’s Alter Servers, a position she held for three years. She was also a member of the Ahanang Community Outreach Programme – a non-profit organisation that offers home-based care for families affected by HIV/AIDS.

After taking a break from her studies, Mahadi enrolled for a National Diploma in Analytical Chemistry in 2012 and completed her B Tech in 2015 at the Vaal University of Technology, with exceptional results. She is currently a Master’s student in Chemistry under the supervision of Dr VE Pakade.

She was awared the Vice-Chancellor’s Award and the Overall Best Student Award 2015 at the recent graduation ceremony.

“As a young black, South African woman, I am extremely honoured and appreciative to have received these awards at such a young age. These have really shown that my dreams are indeed valid. I am so happy that I cannot even find the perfect words to describe it. I would not have made it without the great support from my family and God. They just have always been my foundation of strength. My parents, my seven siblings and my late uncle Matlali Ntholi – inspired and made me value education. Actually everyone in that big, warm family deserves my greatest, extensive gratitude,” she said.

“To my fellow students, hard work does really pay. Honestly, what you put in is definitely what you will get out. I have always worked hard and aimed only for the best. Otherwise, I have always shared my knowledge with others. By teaching others, the concepts are reinforced in my mind, which allows me to perform better in my own courses.”

Above and beyond academic pursuits, Mahadi is a multifaceted young lady striving to become a philanthropist in order to make an impact in communities. She believes strongly in servant leadership and being a catalyst of positive change.