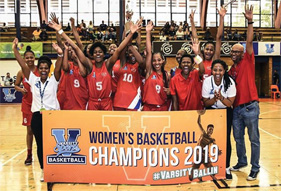 The finals were to be a contest of irony in that the two teams faced each other the previous day with VUT suffering a 10 points defeat (65-55). VUT’s captain, Stabile Ngandini, 3rd year Public Relations student said,’’ we are a team of many accolades hey, it was a little demotivating because we are used to playing against them and winning against them you know. So, I would say it was a little bit demotivating but it was a good one because it actually prepared us for the finals. We were kind of slacking a little bit when we played against them; we underestimated them, so, it prepared us for the finals.’’

The start of the game was a tense and nervy affair for both teams as they slowly made their way to get into rhythm. Defense was solid on both ends which resulted in the first quarter ending in a 12-all stalemate. VUT was first to get into rhythm in the second quarter, enabling them to dominate. They were relentless in their attacks, clinical in defense and spectacular in their interceptions. Despite the valiant play by VUT, NWU was able to get into rhythm too thereby offsetting their opponent’s brilliant play to end that quarter with a slim 4 points deficit (30-26).

The third quarter was an almost blowout for VUT who struggled to maintain their rhythm and tempo that they’d worked so hard for. They conceded a lot more points due to NWU initiating their power play coupled with the loss of discipline in the VUT ranks. They appeared to be crumbling yet they acquitted themselves well enough to maintain the 4 points lead.

In the final quarter of this debut Varsity Sports basketball tournament, NWU surged forward with more vigour and aggression, inspired by the brilliant play they had displayed in the previous quarter. VUT was crumbling. The 4 points lead came to nothing as NWU levelled and then lead the score. If the first quarter was a nervy affair, the final quarter was nothing short of being an absolute debacle for NWU as they lost their lead; fortunately for them, the game ended in a 58-all stalemate just when VUT seemed to be in the ascendancy. The game had been to this point nothing short of ironic.

No sooner had the final whistle blown than it was time for a shootout that would determine the victors. Being true to the irony of the actual game play, the shootout remained true to spirit by being yet another affair of irony. Nerves were at peak operation when both teams missed their first six shootouts. It came down to the next set of players having to shootout against each other until VUT’s Tisamo Maswabi, 3rd year Logistics student, scored a basket to give her team the win. It had been a close game from beginning to end, even the final score being a mere point’s win 59-58. Stabile Ngandini was named the Most Valuable Player (MVP) for her scintillating performances throughout the tournament.

The 2019 season has been the most successful season for the VUT women’s basketball team. The 2019 Varsity Basketball win is the fourth of three previous wins for the season. The team holds titles in the 2019 USSA Championships, 2019 GUB Tournament and 2019 Annual Wits Lady Bucks Tournament respectively.