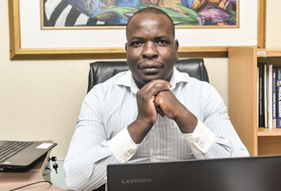 Dr Kaitano Dube is an Ecotourism Lecturer in the Department of Hospitality, Tourism and Public Relations Management

Dr Kaitano Dube is an Ecotourism Lecturer in the Department of Hospitality, Tourism and Public Relations Management within the Faculty of Human Sciences at the Vaal University of Technology (VUT). He was featured on Good Morning America (GMA) a prime morning show by the American Broadcasting Company (ABC) regarding the impact of climate change on Victoria Falls as part of the 50th anniversary of Earth Day. He is one of the leading tourism geographers in the tourism and climate change space in Africa.

He has done a research study on the effects of climate change on the Victoria Falls, after the news scare that Victoria Falls was drying up in 2015 a scare that was to be repeated at the end of 2019.ere.  The research found out that there is a general worrying decline in water flow levels between October and December, particularly over the years. The decline is particularly more pronounced in years of drought where water flow is way below the long term mean for the waterfalls, which tends to trigger anxiety amongst the tourism stakeholders with a negative impact on regional tourism performance.

The falls were affected by seasonal changes but most importantly by climate variability and change, which tends to be repeated in the region of late. “Climate change impact is a space that is grossly under-researched in the region and Victoria Falls was a starting point, we have since expanded the scope of research to look at national parks in South Africa, Okavango Delta, Cape Town and coastal tourism,” he said.

In closing, he said: “There is a lot that we can do as an institution, in embracing global agendas in our curriculum. We need not be left behind, and we need to remain relevant as it will have an impact on the type of graduates that we are producing”.

Below is a link to Good Morning America:

Climate change is a long-term transforming challenge which will have implications in the foreseeable future hence the need to invest in research and innovation around the matter in line with Sustainable Development Goal 13 on climate change action.