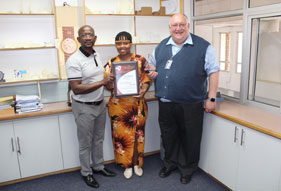 “No one is perfect, but a team can be”

“No one is perfect, but a team can be”

The Vaal University of Technology Southern Gauteng Science and Technology Park (VUTSGSTP) was awarded a Historical Trophy in the Golden Triangle Chamber of Commerce’s prestigious gala awards event on Wednesday, 28 August 2019 at Emerald Resort and Casino.

An ecstatic Mr Hendrik van der Merwe: Operations Manager VUTSGSTP said: “This award gives evidence to how much we are committed to improving lives in our surrounding communities, and we will stop at nothing to empower people who are eager for change.”

This trophy is awarded to an ambassador of the Vaal Triangle who has become a centrepiece of the Vaal’s foundation and has played a significant role in the development of the region through asset management.

Mr Stefan, President of Golden Triangle Chamber of Commerce thanked Mr van der Merwe for his service and support in the community. He added that this is the character they need to make the Vaal Triangle a better place.

“It is a privilege to have you as part of the Chamber and we look forward to the road ahead,” he said.

With this accolade, the VUTSGSTP has once again proved that hard work and perseverance goes a long way. With their famous phrase: “No one is perfect, but a team can be,” they know that united, they are strong.

Also In the News