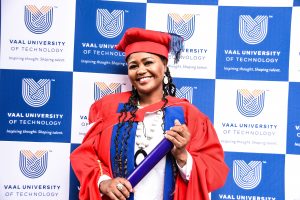 Dr Kgomotso Mtshatsheni graduated with a PhD in Chemistry on Monday, 22 November 2021 at the VUT 2021 Summer Graduation. The title of her thesis was: Preparation and Application of Pine Grafted with Functional Vinyl Monomers for Removal of Dyes from Single and Binary Solutions.

Dr Mtshatsheni was born and bred in Pudimoe (Taung). She is the second born of four siblings to Cynthia and the late Fikile Mtshatsheni. She Matriculated at Lesedi High School.

She joined the Vaal University of Technology in 2007 as a Lecturer in the Department of Chemistry at the Vanderbijlpark campus. She holds a Bachelor of Science (BSc in Biochemistry and Chemistry), BSC Hons and MSc in Chemistry from the North West University formerly known as Potchefstroom University (PUK). She started her Doctor of Philosophy (PhD Chemistry) in 2015 based on wastewater treatment.

Currently, she is a Lecturer in the Biotechnology and Chemistry Department and is responsible for chemical quality assurance and industrial chemical analysis. She is also a Marketing Officer for the department.  She serves as a board member of Seeker’s Tower Maths and Science School.

Dr Mtshatsheni has received several awards in recent years. These include a merit Rectors Award for Teaching and Learning (RATE) in 2017. She also organized and chaired a successful 2019 Science Week event held at VUT. She has presented her research discoveries at numerous international and local conferences. She has published a peer reviewed article and a book chapter in reputable academic journals and two other articles which are still under review.

Her inspiration was activated by the fact that in her academic environment, there are leadership opportunities and management of independent research projects.

“I needed to improve my employment prospects as well as contribute towards the body of knowledge within the National System of Innovation (NSI)” she said.

Some of the challenges she faced during her doctoral studies include juggling several roles as a young woman, a lecturer and a parent. But through the skill of time management she was able accommodate and balance every aspect of her professional as well as personal life. Her biggest challenge was that her experiments were not working out and she was operating in a hostile environment at the time. In the end everything worked out well. The challenges built her character and she became a better version of herself.  Also, her experimental processes yielded positive results.

Dr Mtshatsheni believes that with her doctorate she will be able to unlock her career opportunities and rise to platforms where she can demonstrate her knowledge because of the dignity the qualification upholds.

Giving advice to aspiring PhD students she said: “We need more people to contribute to the body of knowledge. We need problem solvers as we are challenged as a third world country in the 21st century.” she said.

She believes that VUT has the convenience and resources that are readily available to staff and students who wish to further their education. She favourites quote (by Robert Stevenson quote) is: “Don’t judge each day by the harvest you reap, but by the seeds you plant”.

Dr Mtshatsheni draws her inspiration from the University of Cape Town’s Vice-Chancellor: Professor Mamokgethi Phakeng, who embraces her humble beginnings. Her hobbies including reading and listening to gospel music.

The study focused on the production of unique pine-magnetite bionanocomposites (PMC) via a viable co-precipitation method using acrylamide and acrylic acid as functional monomers. This resulted in the formation of efficient acrylamide-grafted PMC (GACA) and acrylic acid-grafted pine-magnetite bionanocomposites (GAA) exhibiting desirable functional groups (such as –CO, –OH, –NH2). This process was then followed by the production of photocatalytic bionanocomposites via a modified sol-gel process resulting in the formation of amorphous carbon doped (PMC–a-C,TiO2) and amorphous carbon and nitrogen co-doped TiO2 (PMC–a-C,NTiO2) photocatalysts. The bionanocomposites were probed for structural morphology and surface and optical properties using advanced characterization techniques. These novel adsorptive and photocatalytic bionanocomposites were employed in the removal of dyes from single and binary solutions including methylene blue (MB), rhodamine B (RhB) and reactive dye 120 (RR 120) under UV light. The bionanocomposites were found to have improved surface areas, pore volumes and pore diameters (59.9 m2.g-1, 0.2254 cm3.g-1 and 28.14, respectively), perform in a wide range of pH conditions, and exhibit enhanced optical properties. The nanoadsorbents demonstrated higher adsorption and desorption efficiency of up to 99.7% after four cycles of use.

The adsorption process was via intraparticle diffusion and it followed the pseudo second order kinetics and Langmuir isotherm. On the other hand, the photocatalytic bionanocomposites (PMC–a-C,TiO2, GAA–a-C,TiO2) and their nitrogen-doped counterparts (PMC–a-C,NTiO2 and GAA–a-C,NTiO2) showed over 97% removal of the dyes. It was further observed that the degradation of the binary mixture of the dyes (RhB and RR 120) proceeded through the zero-order kinetics for the amorphous TiO2 based photocatalysts and first order kinetics for the N-doped amorphous TiO2 photocatalysts. The work, therefore, demonstrated the applicability of plant-based biopolymers in the fabrication of nanoadsorbents and nanophotocatalysts and their potential application in the removal of undesirable dye species from wastewater.