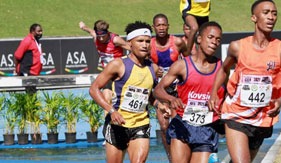 Participants of the Cross-Country League

The Department of Sports and Recreation at the Vaal University of Technology (VUT) hosted the Athletics Vaal Triangle Cross Country League on Saturday, 8 May 2021 at the VUT Isak Steyl Stadium.

Twenty (20) clubs from Athletics Vaal Triangle and one student (Mpho Mosiamedi) from the VUT athletics club participated in the league. ‘’Some VUT Athletes didn’t participate in the league as they are preparing for the University Sport South Africa (USSA) Track and Field Championships from 13 -15 May 2021. The atmosphere was very nice, fresh, and enjoyable and the outcomes were quite positive,” said coach Norman Dlomo.

The special announcement was made after the event that this league was the first of the six (6) League games that will be held in the Sedibeng Region by Athletics Vaal Triangle in conjunction with the local Athletic Clubs by the Executives of the Clubs.

In closing, Mr. Dlomo said that a lot is still to happen as there is another league on Saturday, 15 May 2021 in Transvalia Hoerskool, in Vanderbijlpark. The coach stated that the leagues will be held until August 2021. After all the athletics games, Athletics Vaal Triangle will have to select a team that will represent the region at the National Cross-Country Championship in September 2021.