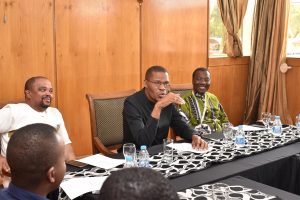 The Vaal University of Technology (VUT)’s Vice-Chancellor and Principal, Professor Dan Kgwadi hosted a special luncheon for staff members who have recently graduated with PhDs – mostly obtained from the University.

The gathering was held on Tuesday, 27 September at Lapeng Committee Room – also present to celebrate with the graduates, were members of management including faculty deans. The event comes shortly after the University successfully hosted its Spring Graduations, where more than 1400 qualifications were conferred to graduates from its four Faculties: Applied & Computer Sciences, Engineering & Technology, Human Sciences and Management Sciences.

Primarily, the event was aimed at honouring the graduates for their pursuit of excellence and lifelong learning. In addition, the luncheon also served as a platform to reiterate the commitment to, and strides made by the University in creating an enabling culture and environment that supports professional development of individual staff members.

Other key discussion points included building strong mentorship and capacity development programmes within the University and setting up systems that support work-study balance for those pursuing their PhDs. With the University currently sitting at 23% of academic staff with PhDs, emphasis was placed on getting more PhD graduates, but also ensuring that the current ones proceed to professorial titles. “While we are recruiting professors, it is very important that we also produce our own,” said Dr Speech Nelana, the acting Deputy Vice-Chancellor: Research, Innovation, Commercialisation, and Internationalisation.

In his congratulatory message, Prof Kgwadi applauded the staff members for their achievements and reminded them that they now form part of the 2% of the world’s population with PhDs. He added that more importantly he commends them for their commitment to their studies and research without lowering the standard of the University’s core pillar – teaching and learning. “Not only does maintaining the highest standard of teaching and learning say a lot about your calibre as an academic committed to excellence, but it also contributes immensely to a fulfilling student experience,” said Prof Kgwadi. Acknowledging that VUT’ research output is currently on a steady but slow rise, he told the graduates that it is through their hard work that the VUT is able to contribute to the National Development Plan (NDP)’s vision that by 2030, 75% of university academic staff should hold PhDs.

Amidst the words of encouragement from faculty deans and members of management, each candidate was also afforded an opportunity to briefly share their study focus areas as well as current research projects.