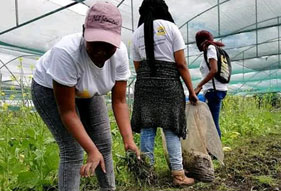 For the very first time ever, the Enactus-VUT team came fourth during the Enactus National competition finals, in a virtual event that took place on 15-16 July 2020, under the leadership of Mr Kekeletso Malule – Team’s President.  As per usual, the team was part of the 16 universities in South Africa to compete and represent their universities.

It is the ENACTUS culture to run with projects, aimed in empowering people, changing their lives both economically and socially by creating networks that are valuable to empower them in terms of livelihoods as well as environmentally.  The Vaal University of Technology presented two main projects, they worked tirelessly to prepare for the year 2020 competition. The first project focuses on the energy sector called Clorganic – a project whereby they produce and manufacture coal which burns over 8 hours and produces less smoke. The company is managed by the VUT students who act as Directors of the project. The second project was on the agricultural sector called Intsika – through which they adopt the already existing agricultural small-scale farms from around the Vaal area.  Projects can be run in the following two ways:

Establish a project from inside the ENACTUS team through which members are requested to bring business ideas after conducting needs analysis and run with the project as long as it is focused contributing to the mainstream of the economy of the country, e.g. Clorganic.

By adopting already existing businesses from respective communities.  Projects like Intsika were identified through lack of skills and assistance was offered.  This was done through imparting of skills to better the lives of the community.  Skills include administrative, marketing, financial management, human resources, etc. to improve and position their businesses.

“The team presented on different roles they played in bettering the 16 farmers’ businesses and these are the projects that landed them the fourth place in the nationals. The team is continuing with the two projects, as their focus for the new Enactus year is on improving the branding of the Clorganic coal project. For the Intsika farming project, the team aims to come up with new innovative ideas of improving the farmers crops,” said Team’s President, Malule.

Working together as a team for the 2020 Enactus year (which ended in August), the following was achieved:

number of adopted farms increased from four to sixteen;

Reached Enactus National finals and were in the fourth place.

“As the president of the Enactus team, I am very happy and looking forward to the new Enactus year. The team acknowledged the unwavering support from faculty advisors and members of the Enactus Executive team below which helped them to strive able all their challenges, namely:

For any clarifications and questions, please contact Mr Kekeletso Malule – Team President at Malulekj@gmail.com or 081 718 0107.