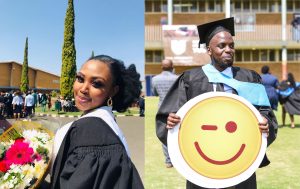 The two were conferred Diplomas in Information Technology and Internal Auditing, respectively at the University’s recent Spring Graduations.

Nomvula, who grew up in the East Rand, is already fending for herself in the corporate world – she is currently working for International Business Machine (IBM) as a Technical Graduate working as a contractor at the South African Revenue Services (SARS).

In 2007, tragedy befell Nomvula when she lost both her parents in a fatal car accident, after which her grandmother, uncle, and aunt took over as her guardians. She says unfortunately the grandmother also passed on, and therefore she would like to dedicate her achievement to her aunt and uncle whom she refers to as her parents.

Prior to ascending to the highest student body, Nomvula served in various leadership roles including Chairperson of the Faculty of Applied and Computer Sciences and took part in the appeal committees to ensure that students are not academically excluded. Passionate about seeing fellow students succeed academically, she was involved in assisting some of the students go to certain companies to learn about their chosen career fields, while she also worked closely with mentors to try and ensure that no students are left behind academically. During her tenure as the Legal and Transformation Officer in the SRC, she says while there are too many to mention, one of her highlights was convening the constitutional summit which reviewed the previous SRC constitution and delivered a new one that was adopted by the University and is currently in use.

Speaking of the journey ahead, she says she plans to further her studies until she becomes a professor and ultimately fulfil her dream of becoming a university Vice Chancellor and Principal.

When asked what advice she would give to other students working towards their qualifications, Nomvula said:“ if the going gets tough, then you know you are doing something that will be worth it in the end, nothing big is easily achievable. Hurdles are supposed to make you resilient, so take them as an opportunity to grow and celebrate every little achievement you get. Do not forget to have fun while you are doing that.”

On the other hand, Surprise who hails from Giyani, Limpopo also described his academic journey as a bumpy one, but remains grateful, nonetheless. “I experienced a lot of financial challenges from my first year, but my mother has always been on my side since day one,” he shared

Like most student leaders, Surprise also fought a lot of battles for his fellow students – including financial and academic issues. Lastly, as a Religious and Cultural Officer, he says he played an instrumental role in trying to secure venues for students’ religious structures, something which he said he didn’t achieve.

Currently actively looking for employment, he says he would love to work for a company such as Transnet or MTN as a Junior Internal Auditor.

His advice to students is to always focus on their studies, and that they must choose friends wisely because friends play a very important role in one’s academics.

Both Nomvula and Surprise have attributed part of their successes to the National Student Financial Aid Scheme (NSFAS) that funded their studies.