Vaal University of Technology, with Sedibeng District Municipality, is honoured to have hosted the OR Tambo Games on 24 October 2014 at the Isak Steyl Stadium.

Vaal University of Technology, with Sedibeng District Municipality, is honoured to have hosted the OR Tambo Games on 24 October 2014 at the Isak Steyl Stadium.

The annual event, organised by the South African Local Government Association (SALGA), is in honour of the late ANC stalwart, Oliver Reginald Tambo. The tournament gives municipalities an opportunity to compete against each other as the games rotate to different municipalities around the country.

Present at the event were dignitaries from SALGA, Cllr Mofokeng: Executive Mayor in Sedibeng District Municipality and Vice-Chancellor and Principal of the Vaal University of Technology Professor Irene Moutlana.

In her address, Professor Moutlana said the university was gratified to host an event of such magnitude and that the games marked competitiveness, discipline and competence.

“Through this ritual, we will keep the legacy of OR Tambo alive forever,” said Cllr Mpho Park Tau Chairperson of the PEC SALGA Gauteng thanked the university and municipality for their contribution and said he hoped it was an initiative that people could learn from.

Cllr Mahole Simon Mofokeng: Executive Mayor in Sedibeng District Municipality declared the games officially open and announced the next host. The torch was lit as a symbol of the commencement of the games.

The event was sealed with a gala dinner held at Emerald Casino where awards were conferred to the best performers. 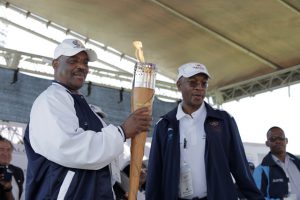