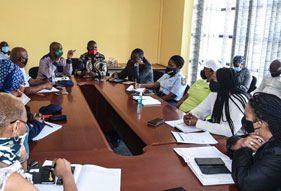 VUT leads the change in Gender based violence

VUT leads the change in Gender based violence

Proceedings of the meeting

We live in a country where crime is a reality, and it does affect all of us, but the safety of staff and students at the Vaal University of Technology (VUT) remains the highest priority. On Tuesday, 15 September 2020, VUT in partnership with Gauteng Community Safety, Sedibeng Community Safety, South African Police Services (Vanderbijlpark) and the Department of Social Development held the VUT Community Safety Forum meeting as a call against violence perpetuated against women, the vulnerable and marginalized members of the community. This forum is a new drive that is starting at the institution and will not only create awareness of gender-based violence but also prevent it.

In his welcoming address, The Acting Director of Community Engagement, Mr Joseph Radebe thanked all participating stakeholders for their efforts in ensuring safety is guaranteed to the staff and students of VUT. This meeting served as a response plan to gender based violence at institutions of higher learning. VUT does not simply recognize the prevalence of gender-based violence but is prepared to act to change the culture that generates such violence against women and children.

Ultimately, given the complexity of gender-based violence at universities, punitive measures must be put in place in addressing the direct violence, keeping in mind the services that are lacking at this level. The solutions brought forward include, finding a suitable space at the residences to establish a Victim Empowerment Centre at VUT.  This will translate in the following commitments:

The working partnership between the Department of Community Safety and the Vaal University of Technology was initiated in the 2013/2014 financial year.  This was followed by several joint programmes and activities which were successfully undertaken.

The SAPS in Vanderbijlpark reported that, in the last few weeks, there has been a single sexual assault case reported at one of the private student accommodations outside campus. The SAPS has also acted to resolves cases, mitigate obstacles to resolution of cases and improve safety and reduce gender-based violence.

Recommendations were made to form a task team that will oversee the drafting of an MOU between the Gauteng Department of Community Safety and VUT.  It was also noted that the MEC intends to launch the project during the period of 16 days of nonviolence against women and children (24 November to 10 December 2020) at VUT. The meeting also called for consistent communication with the office of Ms Kediemetse Mokotsi, Director of Marketing and Public Relations on behalf of VUT to fast track this process.