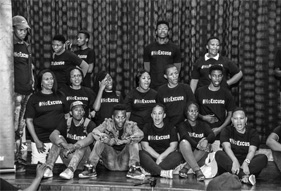 Students pledge to act against gender based violence

The number of violent incidents has increased rapidly since 2013 in South Africa, where each day a woman is raped or murdered. Many South Africans have stood up to fight against women and children abuse, with some launching campaigns against gender-based violence.

Institutional HIV/AIDS Unit invited No Excuse for Abuse, a movement that was launched in 2018 by Carling Black Label beer, to campus on 3 October.

No Excuse for Abuse believes in uniting all South Africans to stand against woman abuse by creating conversations and providing tools for people to take positive action. It is also being used as a means of driving responsible drinking, encouraging the fathers of tomorrow to create a healthy, loving and protective environment.

The campaign has partnered with author and founder of Father a Nation, Craig Wilkinson to create a new programme called Champions for Change across South Africa.

Their visit to VUT was based on teaching students why gender-based violence happens at such an alarming rate and providing practical actions every man and woman can take to overcome it. They also talked about masculinity and the reason many men become abusive.

“The problem is not men and masculinity; it is wounded men with a distorted view of what masculinity is,” wrote Craig in his book.

One of the presenters Mr Sydney Madibo said that the aim of the programme is to change the perception that “men are trash” so that we can build a healthy society.