The Vaal University of Technology (VUT) Alumni Department, in collaboration with SAIEE (South African Institute of Electrical Engineers) hosted women in engineering event on Friday, 6 March 2020 with the aim of bringing together women who have been successful in the engineering industry to share their achievements and challenges.

Women engineering students were invited to come and listen to various views from the working engineers and be inspired to stand their ground in the industry.

“The engineering industry is perceived to be for men, not women. As women we need to be vigilant, forward-thinking, smart, goal-driven and keep in mind that it is not only men who can do this work,” said Mrs Kefilwe Mmutle, Senior Network Engineer at Business Connexion Ltd (BCX).

Mrs Mmutle shared her journey with students. She started working at Telkom in 2012 as a Transmission Technician and was the only woman to had applied for the technician’s post. When she arrived at the interview, men were surprised to see her there.

She had to go an extra mile to prove her capacity in the technical team, which was difficult for her. She had to learn new techniques, but all the while had the motivation to “learn right, do it right and be patient”.

She was eventually awarded a certificate of excellence and claimed her position as a Technical Engineer.

Mrs Onalethata Kabelo, a Power-grid Automation Systems Expert from ASEA Brown Boveri (ABB), an automation company, also spoke to the students. She is also a lecturer at ABB and in charge of the student programme which offers apprenticeships, learnerships for disabled students and vacation work. 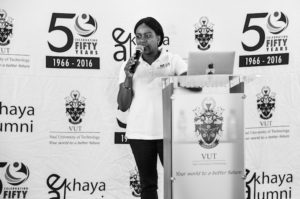 Mrs Punkie Majola, a Senior Engineer at City of Ekurhuleni Municipality and Chairperson of Amalgamated Municipalities, spoke about their aim of accelerating women’s progress in the industry by giving mentorship to those who have just entered the engineering field.

SAIEE president Mr Thato Sebekedi thanked all the women who participated and mentioned that they would organise a site visit soon. He also encouraged students to join their shoe-collecting initiative for primary school children around the Vaal.